Come learn to dance Lindy Hop at our school in Palma enjoying the best swing music of all time.

Come and enjoy learning one of the most fashionable dances, learn to dance Lindy Hop in Palma listening to the best swing songs.

What is the Lindy Hop?

Lindy Hop is a dance style that emerged in the late 20’s district of Harlem, New York. The music that characterizes his dance is the swing, musical style that appears from jazz. In the beginning, she started dancing in the Savoy Ballroom room, where the African-American community joined to unwind before a convulsive social situation. Over time, it was spreading to other places and cultures until it was recognized as a dance of the time, regardless of the origin or origin of those who danced.
Lindy Hop’s name has its origin in an anecdote. In 1927 an aircraft pilot named Charles Lindbergh (Lindy Alias) managed to fly alone with his plane, known as’ Spirit of St. Louis’, from New York to Paris without scaling. The next day the newspapers titled “Lindy hops the Atlantic” (Lindy jumps in the Atlantic Ocean) and during a party in the Savoy room, Lindbergh’s success was commemorated. In that same party, a journalist asked for the name of the dance to one of the best dancers of the moment, George Snowden – Shorty George, for his short stature. He responded in a murky manner: we dance Lindy Hop (Lindbergh’s jump).
During the 30s and 40s, the lindy hop and swing music were spreading throughout the United States and for all social classes. It’s the time of the Big Bands (Benny Goodman, Count Basie, Duke Ellington, Glenn Miller, etc.).

By the 1950s, a new variation of the swing appeared that will be very popular: Rock & Roll.
As of the 60’s, the great popularization of television and the birth of pop, among others, led to a change of time. The dance halls, before being filled, are left empty, the Big Bands stop touching and the lindy hop falls into oblivion.
In the 1980s, however, Lindy Hop’s recovery began with the great Frankie Manning, known as the Lindy Hop Ambassador, who, in his seventy years, began transmitting his knowledge to the new generations. The resurgence of Lindy Hop begins, which extends all over the world and reaches our days.
The Lindy Hop scene is currently experiencing a real boom. Every day more and more people are encouraged to learn this dance so cheerful, social and fun that fills our streets with hoppers dancing with swing.

Other Courses For You 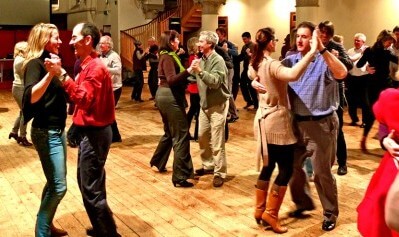 Come learn to dance, enjoy dancing with your partner. Start course so you do not miss any of the dances and figures.

In our Intermediate Ballroom Dance course you will be able to learn new rhythms and improve and improve the rhythms already learned previously. Focused for couples who have already danced and have ever attended a course of initiation. If you do not know what your level is, do not worry, our team of teachers will […]